Syringoma laser treatment is very effective in removing  Syringoma, but it is
very expensive. This Syringoma laser removal method is similar to electrolysis or electrical arcing to removing the Syringoma but slightly more difficult to perform and also more dangerous.

Visible and invisible red light waves are concentrated and sent through a laser aimed at the syringoma destroying its tissues.

Laser therapy is usually the preferred treatment option for syringomas because it significantly reduces the risk of scarring and infection. And in many cases, it only takes a single laser procedure to remove the growth entirely. 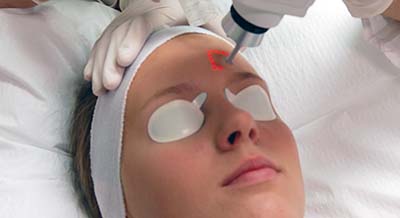 skin lesions removal in general. The perception is not mistakenly placed. Lasers are very effective in removing little moles and birthmarks with a high degree of accuracy. This means that if used properly laser Syringoma removal can have excellent results in one session only.

The type of lasers used for this type of cosmetic procedure is called CO2 fractionated Laser.

If used for common eruptive syringoma, usually one ablative session per Syringoma will suffice to remove these benign lesions by using the Co2 laser.

On the other hand, when removing/treating periorbital syringoma it is usually recommended a minimum two course of cosmetic treatment:

Therefore the first line of cosmetic treatment is usually to destroy these sweat duct tumors by using the CO2 laser. A topical anesthetic is usually required to be applied on the area to be treated with the laser for maximum comfort for the client.  However, these unsightly benign skin lesions don’t go away without a fight, sometime they are quite difficult to eradicate in just one session because they tend to regrow quite quickly.  Because of this tendency of regrowing after the CO2 session there may still be small flat bumps which can be leveled off with cosmetic peels.

The cosmetic peels that can be used can either be for home use (ie Glycolic acid at 10%-20% concentration or mandelic acid 20 to 30%). If the cosmetic practitioner prefers one or two sessions of high concentrated peel can be applied as appropriate on the patches where the syringoma are still slightly raised.

Although lasers are considered to be high tech even a mild superficial ablation can be uncomfortable or even painful. Even with the use of lasers, it is always advisable to numb the area before treatment.

In cosmetic or beauty clinics the preferred options are topical anesthetics containing a 5% emulsion preparation, containing 2.5%  lidocaine/prilocaine respectively (i.e. numbing creams like Emla). These preparations are usually available without prescriptions from the local Chemists. These type of topical anesthetics are normally used also by tattoo artits to numb the area before tattooing. Since tattoo artists are normally not medically qualified there is usually a mild topical anesthetic available without a prescription (depending on local legislation). 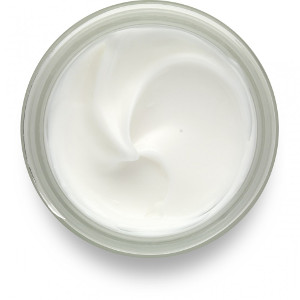 At dermatologists’ clinics usually up to 20% concentrations are used in topical anesthetic creams. Normally local anesthetic injections are not required for this simple procedure however some doctors, accustomed to administering injectable lidocaine, can opt for local anesthetic. The advantage of local anesthetic it the fact that the area will be numb within a few minutes following the injection.

The aftercare is minimal after this type of procedure. Although the risks of infections are very low after a  superficial cosmetic procedure it is advisable to instruct the client to apply the appropriate antiseptic (cream) twice a day. This will drastically reduce even further the risks of mild infections. In order to reduce the risks of hyperpigmentation sunscreen must be worn daily for at least 3 months after the last treatment.

In general, a laser treatment is not painful or causes very little pain that is manageable for most people. However, for some treatments that do involve more pain (such as Fraxel) or for individuals who have a lower pain threshold, topical analgesics can be applied prior to the procedure to reduce or eliminate discomfort.

Side effects of Laser Treatment

Pain. Most people feel very little pain during treatment due to the measures discussed above. Rarely there is mild discomfort for the first day after surgery, but Tylenol is effective for it.

Redness. A pink color may persist for two weeks to two months after the laser surgery. In rare instances, it may last three to six months. This is more common in patients who have a history of flushing and blushing easily or who already have dilated vessels on the surface of the skin.

Wound Healing. The CO2 laser causes a superficial wound to the skin that takes approximately 2 to 10 days to heal. The superficial injury of the outer layers of the skin may result in mild to moderate swelling. Crusting is rare but peeling is common. Once the surface is treated, it may be sensitive to the sun for approximately 4-6 weeks.

Pigment Changes. The treated area may heal with increased or decreased pigmentation. This is rare and occurs most often in darker skin and 2-6 weeks after treatment. Hyperpigmentation usually fades in three to six months, though rarely pigment changes can be permanent.

Excessive Swelling. Immediately after laser surgery, there will be swelling of the skin. This is a temporary condition and will resolve over three to seven days.

Scarring. There is a very small chance of scarring. This includes hypertrophic scars or, very rarely, keloid scars. Keloid scars are thick, raised scar formations. To minimize chances of scarring, it is important to follow post-operative instructions carefully. It is important that any prior history of unfavorable healing be reported. Do not pick!

Eye Exposure. There is also a risk of harmful eye exposure to laser surgery. It is important to keep your eyes closed and have protective eyewear at all times during the laser treatment.

Infection. Occasional infections can occur. If not treated promptly, these could result in scarring.

Cost Of Laser Treatment
Laser skin resurfacing is considered a cosmetic procedure, thus it’s not covered by medical insurance.Costs vary between the types of lasers used. according to the American Society of Plastic Surgeons (ASPS), non-ablative optical device treatments value concerning $1,000 per session, whereas ablative treatments are concerning $2,000 per session.